Lagerwey has received an order from Growind to build two L136 4.5MW wind turbines in the Eemshaven, situated in the northern part of the Netherlands. The L136 is the largest onshore IECII platform on the market.

Lagerwey’s latest turbine has greater onshore capacity than any other. While other platforms are only capable of withstanding average wind speeds of up to 7.5 metres per second, Lagerwey’s turbines can handle up to 8.5 m/s. This reduces the cost per kWh generated.

The Lagerwey turbines will replace two old wind turbines in the port of Eemshaven, which have already been dismantled. In January 2017, the new foundations for the L136s will be constructed in the same locations. Construction work on the first new turbine will begin in March 2017. This turbine will be completed by the end of April, creating enough energy for over 5,000 households.

Climbing Crane
The second turbine will be constructed at the end of 2017 using the Lagerwey Climbing Crane. It will be the first time the Climbing Crane will be called into action following the presentation of this innovative concept in June 2016. The turbines have a hub height of 132 metres and a rotor diameter of 136 metres, resulting in a tip height of just over 200m. These will therefore be the tallest onshore wind turbines in the Netherlands.

Flexible in de wind
The Lagerwey L136 is ideally suited to the site in Eemshaven as it is designed for areas of high turbulence and high vertical wind shear (the difference in wind speeds between the highest and lowest tip points). This phenomenon is particularly prevalent in onshore locations, heavily built-up areas (such as the port of Eemshaven) or wooded areas. 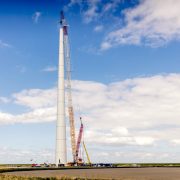 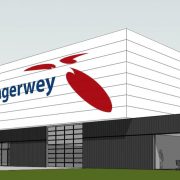 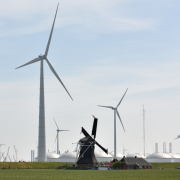